After almost 3 months of prepping, planning, an estate sale, packing up our house, getting it ready for rent, a trip to Oregon to pick up our kids from their grandparent’s, back home, 10 days of packing, rearranging, unpacking, and more rearranging…we FINALLY made it to Ecuador. Our trip down took about 3 days. We had seven large suitcases, two carryons, 2 duffles, and 5 backpacks. Now imagine trying to get an 11, 7, and 5 year old to help pull all this in and out of the airports and hotels!

Something interesting we found was that most everyone in Miami seemed to speak Spanish as much as they did English.

We met a sixty-something American couple from New York heading to the Galapagos on our flight out of Miami and they were with us the rest of the trip into Guayaquil.

Dawson lost his Nintendo DS on our flight from Miami to Quito (wouldn’t say this was a ‘highlight’, though).

We stayed in one of the oldest buildings in Guayaquil. The owner was originally from Chicago and left when she was about 5 or 6. We absolutely loved this experience. The hotel was gorgeous, full of history.

(Check them out here: http://www.tripadvisor.co.uk/Hotel_Review-g303845-d1996631-Reviews-Mansion_del_Rio-Guayaquil_Guayas_Province.html)

Our driver, Evalio, (that is my guess at the spelling…I probably butchered it) was just amazing. When we arrived in Guayaquil, we couldn’t find him.  We had came out a different terminal than he had anticipated.  I left Mike and the kids with the bags and went looking for all the guys holding signs with people’s names on them.  I finally saw “SMITH” on one of them. It was such a huge relief!  Evalio was incredibly helpful and took us to our hotel.  He even kept all our luggage in his car so we wouldn’t have to carry it up four flights of stairs!  The next morning we got up and drove to Manta.  As we drove through each little town from Guayaquil to Manta, he pointed out that each town had its own ‘specialty’. The first one we drove through men were walking between the cars at intersections selling these long loaf’s of banana bread. We stopped and got one. It was so good. It was fresh out of the oven and warm. The next little town had muffins made of corn and then ones made out of yucca. They had cheese baked in the middle of them. As you drove through the town, the men and women were standing next to their open ovens, waving red towels to get your attention. We stopped and got some of these, too. I figure might as well get the full experience, right?! The corn ones were my favorite. They were hot, gooey,  and delicious. The last town we went through before Manta had honey, tons of it. The people had recycled bottles and jar and put the harvested honey in them. We also drove through the town where the Panama hat actually originated.

My favorite moment thus far was this:

While waiting for our driver to get to the hotel take us to Manta, we explored the promenade area outside our hotel. We were in an area where to your right you see the oldest part of Guayaquil, then to your left is a more modern area. While we were exploring, a large school group of teenage students came onto the promenade with their teachers. We were sitting on the steps and they saw Brooke and Dawson playing on the stair railing. They were completely enthralled with our kids blue eyes. About 30 of them just swarmed around Dawson and Brooke. Our kids got overwhelmed and shy and came running over to us. All the teenagers followed them over and then surrounded us.  They wanted Mike and I to take our sunglasses off so they could see our eyes. When we did they just exclaimed, clapped, laughed and got excited about our eye color. They didn’t speak English and with our broken Spanish, we managed to communicate our names and where we were from. It was the coolest experience! I wish we would’ve thought at the time to video or take a picture of the group together.  I caught the one below when Brooke and Dawson took off running. The whole experience was such a pure and innocent portrayal of humanity at its best. The trip from Kansas to Ecuador was an adventure all by itself.  It was exhausting, nerve-wracking, and exciting.  However, it was absolutely worth it (I think I gained an extra measure of patience)! 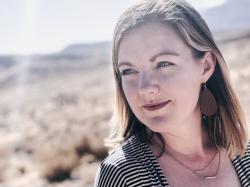